Hereditary angioedema (HAE) is a rare genetic disorder primarily caused by mutations in the SERPING1 gene encoding the C1 inhibitor (C1INH) that leads to plasma deficiency, resulting in recurrent attacks of severe swelling. In the current issue of the JCI, Haslund et al. show that in a subset of patients with type I HAE, mutated C1INH encoded by HAE-causing SERPING1 acts upon wildtype (WT) C1INH in a dominant-negative manner and forms intracellular C1INH aggregates. These aggregates lead to a reduction in the levels of secreted functional C1INH, thereby manifesting in the condition that allows the disease state. Interestingly, administration of WT SERPING1 gene is able to restore the levels of secreted C1INH, thereby opening up a novel mechanism justifying gene therapy for HAE. 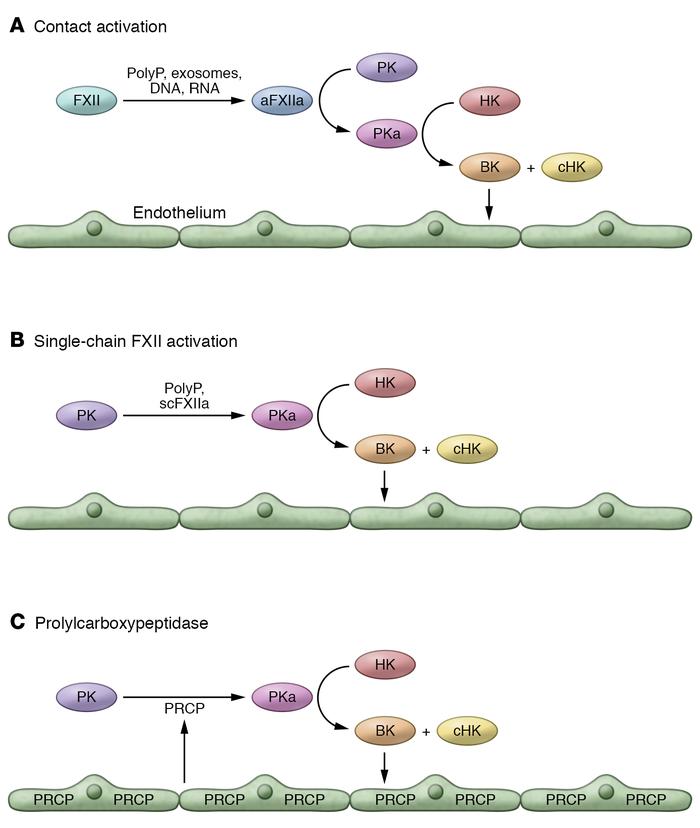 In all cases characterized to date, angioedema is induced by excess BK delivery to vascular endothelium. With the exception of abnormal angiopoietin 1, there are three hypotheses regarding the initiating events for an acute attack in the hereditary angioedema syndromes leading to excess BK formation. () Contact activation. Ambient levels of negatively charged biologic surfaces like polyphosphates (polyP), exosomes, DNA, RNA, or aggregated-denatured protein (not shown) arise, and in the presence of low C1INH allow for FXII activation to FXIIa. FXIIa activates prekallikrein (PK) to form plasma kallikrein (PKa) that cleaves high-molecular-weight kininogen (HK) to liberate BK and leave cleaved HK (cHK). () Single-chain FXII activation. When the three arginines in the light chain of FXII are mutated to alanine, there is still some proteolytic activity of this form of FXII (1/4,000th) that can activate PK to PKa in the presence or absence of polyP. () Prolylcarboxypeptidase. Prolylcarboxypeptidase is a membrane endothelial cell serine protease that activates PK to PKa at a low (9 nM). In low C1INH states and/or when PRCP is upregulated, it has the ability to activate PK to PKa to cleave HK and liberate BK.